We have been thinking of extending the house here at ForkHall to give access to a further garage as well as a bike locker and an office for Simon out behind the current garages.

Vicky had a thought today that makes a lot more sense in may ways – forget the extension, replace the entire driveway and put a new outbuilding made of wood that can be used for bike (and other) storage as well as a potential outdoor office.

This may make significantly more sense as the house will not be oversized and the driveway could easily be the fancy concrete setup all the way around the house as is, and hence will not be wasted.

We are seriously considering this option – it will save us 50K UKP and will still smarten the front of the house up.  We can then use said saved funds for a new kitchen etc 🙂

We have been in and out of challenges with schools for Elliot, and have finally settled on St Hildas school in Horbury – a feeder school for Silcoates in Wakefield.  We went yesterday with Elliot for a Silcoates specialist to watch how Eliot interacted both with just us and then with the other children – so he stayed for a few hours yesterday.  He seemed to really enjoy it, although he got a little stressed in the playground apparently since ALL the children wanted to be his friend.  Today was his first full day (again as part of the whether the school can cope with his needs (and hence if they can accept him) and as we picked him up tonight as school finished (3:30pm) he was clearly happy in himself, the teachers all delivered glowing reports and he is IN 🙂

We are over the moon as he seems to have settled quite well even though it just 2 short days… Last night he was telling us all about his skeleton and how it was inside his skin and in his tummy 🙂 WOW !!!

We have been advised that we will not automatically get a place in the senior school so we have to just sit and wait to see how he develops within the infant and junior schools.  No major drama 🙂 Kind of thought there would be some form of entrance examination in any case 🙂

So, we also have an appointment next week (Wednesday) to see the nursery section as we are seriously considering 2 full days a week for Olly as well – he REALLY did not want to come away with us when we left Elliot on both days and when asked if he wants to go to school, his response is “YES, YES, YES !!!” 🙂

During this same appointment we will be passing cheques for our VERY FIRST school fees – yikes ….

What a sensational colour 🙂

As you might be able to tell from the bottom photo, Vicky was very keen to get the keys – waiting patiently by the door of the dealership 🙂

We have also bought a new number plate for THE BEAST – VAR 72.  This has not yet arrived, so we will transfer this onto the car as soon as we get the V5 document from the DVLA in a few weeks.

VAR 625 will go onto the Porsche next week hopefully and V12 UST wlll be going on the Aston shortly after we take delivery.

So, we have been back a week now, and moved back into Fork Hall on Friday of this week.  We just managed to get some new beds for the boys delivered to the house on Friday, and in reality, this was the signal that we could move back in.  Elliot wanted another car bed and Oliver was keen for a train.  So, mummy found a guy that hand makes these really cool full sized single beds that we could have personalised, so Oliver’s Thomas style blue bed has OLIVER written down the side in appropriate text AND it came with a toy box tender 🙂  It fills the bedroom to the point where we are wondering if we need bigger rooms !!!  Elliot’s car is also personalised with ELLIOT as the registration plate.  Both the boys are over the moon with their beds although Olly only seems prepared to sleep in his until approximately 12:30am though… So he then joins mummy and daddy again….  We will definitely need a 6ft wide bed this time around….

Earlier in the week we came across an offer to buy a Porsche Boxster S (early 2003) for under 8 grand.  So we drove it, loved it, bought it 🙂 Felt really wrong buying it in some respects since it is hardly a family machine, but we felt that it would be a great summer car for next year and that with only 56k miles, it was only just run in.  It needs cleaning (guess daddy will have no excuse to not do this himself since he has not a lot else on right now 🙁 ) and we have bought a registration plate for it – V12 UST – cheapy number that has reasonable significance.  We almost bought Y31 NUT as well – thought that was funny.

Then, yesterday we went out on a tour of yorkshire hoping to find two cars – one for mummy and a cheeky little  Aston Martin DB9 for daddy 🙂 So, we head out to Shipley’s MotorHouse as they had a convertible on a 05 plate available.  They also had a couple of Rang Rover Sports, a BMW X6, a Porsche Cayenne and a Mercedes ML.  Hence Vicky would be able to drive all of the above to figure what she fancied as the family beast.  Well as it happens, the guy (Maj) that we were meeting did not seem that interested in helping us in that he let us get into the cars and then disappeared for more than 10 or 15 minutes – he was helping get another car out of the building (Bentley Continental Convertible, black on black etc).  Vicky pointed out that the cars weren’t all that clean and together with the shun we were receiving from Maj, we decided to leave.

The next stop was in Sam Hall in Harrogate who had an Aston Martin DB9 Coupe and a nice looking Porsche Cayenne S.  However we were hours early now since we had only been at the first place for about 30 minutes rather than the 2 hours that we has assumed that we would take.

So we set off for Harrogate with the plan of stopping in a cute country pub for lunch.  ON the way, we (well Vicky and Clare) spotted a very nice looking Range Rover Sport on some rocks for sale.  As we turned the car around it became clear that the car was actually sat in a Land Rover dealer (we were in Guisely) so we thought, wy not – Vicky would most likely get to drive the Sport model, as she had already decided that the full Range Rover was off the cards as she does not like the way they drive (too much roll).

This stop turned out to be the thing that brightened our day – they had just received a pile of 12month old stock direct from Land Rover and had some wonderful goods to see.  Right away we saw a beautiful Bali Blue Sport HSE Range Rover Sport (this is the colour that always catches our attention on the roads so we were astounded to find one available) sat right in front of us as we got out of the car.  A very helpful chap wandered over, got the keys and within a few minutes Vicky was test driving the beast.  It had cover 8700 miles, was a 3.6litre V8 Diesel model, had black leather upholstery and felt like all of the relevant toys were already present.  Vicky loved the drive and while the asking price was almost 20k UKP more than we were going to spend, it felt like we would be fools to let it go.  So, long story short, Vicky is hopefully collecting her new beast on Thursday next week 🙂 Photos to follow once we collect.

The trip to Sam Hall was not quite what we had envisioned as Sam had just sold the DB9 that we had gone to see 2005 model in Black with sand beige interior), however fortune MAY have been on our side as he had just taken delivery of a one year newer black DB9 (this one with black interior – actually works better in the flesh) with slightly more miles on, and while we could not drive the car on the day since it was being cleaned and prepped, we have agreed a sale price and Sam is bringing the car to Ossett on Monday for us to inspect again and drive.  So, fingers crossed we may have our autos sorted 🙂

Today, we are finalising the paperwork for the customs folks (else we will not get our gear back from the ship at the end of the week) and taking the kids to the park etc.  Ty stayed over last night and the boys have been buzzing all morning.  There is no question about how much these guys have missed each other this last 18-20 months 🙁  All restored now though 🙂

Two nights in and the boys have not slept at all well, so sadly the lighter sleep of the two of us (mummy) has been up with them 🙁

Elliot is convinced that there is somebody hiding behind the door in the bedroom and Olly doesn’t seem to think he needs an excuse.

So, mummy has had all of about 4 hours sleep per night split up in possibly 30 minute chunks 🙁

The kids did incredibly well on the plane with Elliot getting 6 or 7 hours sleep and Olly managing nearer to 4.  Olly then slept all of the way back to Ossett from London in the car.

We are heading to Halifax to Grandma Rust’s tomorrow for dinner – let’s just hope that we all get some sleep tonight…. 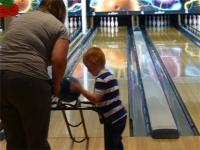