Simon spent some time this morning in New York pacing the streets and then flew back to SFO this evening. His bag was first off the conveyor, the bus was right there to take him to the car park and the car was easy to find, fired up straight away and the traffic home was effortless – mega result !! 🙂

While in NYC, there was a film crew on 35th and Broadway that were actually shooting a movie as Simon walked by – never seen anything like that before – very cool.

There was a letterbox full of crap though 🙁

Tomorrow, Simon is probably going to go out cycling for a big portion of the day, and then Monday is all about opening up the new office in San Jose.

Simon flew back to the US yesterday, and is staying in New York City for the next 5 days – the annual kick off event for the US business is on Thursday, and there are various customer and partner meetings wrapped around it.  Simon will be back in the bay area on Saturday 31st ready to move the office to San Jose – almost 12 miles from home – result 🙂 Going to be a great commute each day for Simon from Monday onwards 🙂

Vicky and the boys are still in the UK enjoying a couple more weeks with the family, before heading back to California in 2 weeks or so.

A great day today here we have seen all the Rust family in one day – a feat that has not occurred since Michael and Angela’s wedding a couple of years ago.

Olly wore himself out so much in crawling around his Grandma’s garden that we only got to the end of the road as we left and he was already asleep !!!!

Timmy has taken great care of Pepsi and Max – they are in great shape – OK so the kennel cough is heading out, but otherwise they are doing great.

We are hoping to have a swim in the morning and then a BBQ in the afternoon – then Simon is needing to prepare for his trip to New York, while Vicky and the boys are staying on in Ossett for a couple more weeks.

The Hawaii countdown remains – we will be there enjoying life in just 18 days:-)

Elliot has been as good as gold and pretty much got timezoned in straight away.

Daddy has been away for a couple of nights staying by the office so he’s been alright, jack ! 🙁

It has also not stopped raining since we returned – we are somewhat looking forward to the sunshine back in CA – oh yes, and the Hawaiian vacation….

Two very looooonnnnnnngggg flights, and we are now back in the UK for a little while.  Simon is here for just under 10 days and Vicky and the boys for three weeks.

We are tired since Olly did not wish to sleep at all, thus keeping us all awake and Elly was just too excited to sleep.

We plan to stay awake as long as we can today to fight through so that we hope to sleep well tonight and then wake up tomorrow in the right timezone and be fixed 🙂 Good plan, but not so sure of the sucess …. 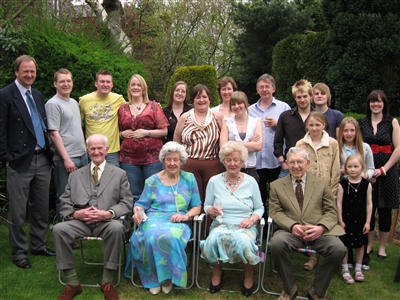