Another packed weekend gone by ……

We saw Simon’s mum and Grandparents on Saturday and were on airport duty early on Sunday morning collecting Vicky’s parents from their Cuban vacation.

We think that Elliot has his first top tooth coming through as Sunday night and all day today he has been a little monkey.  While he won’t let Vicky near his mouth, it looks as though his front right upper tooth is heading south 🙂 Hopefully it will come through really soon, and his discomfort will cease for a few days (until the other one heads south anyway…)

Elliot is beginning to get very steady on his feet as well as reasonably rapid at the crawling stuff, so we went and bought two safety gates – one for the top of the staircase and one for the bottom.  We also invested in a large play den area for him, that can be unfolded to make a handy fire and TV guard or (as we have it setup) to simply keep him in one side of the lounge and hence is unable to get close to the TV or the fireplace.

The weather is pretty bad at the minute here in Ossett, with many local roads having been closed due to the flooding and many local rivers have burst their banks etc.  Amazing what a few days of heavy rainfall can do and the damage that it can leave in its’ wake.  We are suitably high enough up that a river is extremely unlikely to cause us damage but with all of the silt and crap in the storm drains, who knows if we could find ourselves in a flood scenario – let’s just hope not….. And the rain has stopped….. for now……..

Simon is back at home again now following a fairly eventless flight, although the Delta terminal at New York JFK airport is a very poor airport indeed.

Yesterday was Fabrizio’s 1st Birthday Party at his Grandparents house and then over to Dave’s for Father’s Day Celebrations. We were definitely very well fed and reasonably well watered 🙂

Vicky and Clare have booked a holiday to Beaches in Jamaica for Greg’s 60th Birthday celebrations – Greg has very kindly offered to pay for the family to go away for two weeks – how awesome is that ? Beaches Negril Resort and Spa is the target destination….

The weather is actually better in Ossett than NYC currently and so Vicky and Elliot spent the day in the garden playing out.  It seems he is currently scared of the grass – possibly because of the strange texture or something. So, Vicky can leave him in the garden on a towel safe in the knowledge that he will not presently wish to crawl off the towel 🙂

Simon is away until next Saturday morning…..

We have also managed to get hold of the old Mile marker seat that used to find itself in all kinds of places at the old house on Rothwell Road.

Nothing else to report on…..

What a fabulous weekend – the weather has been outstanding in fairness, and completely not what we all expected.  We spend a portion of Saturday in Halifax, then another hour or two @ Dave and Jean’s and finished the day off with a meal out at the Kaye Arms. It was great to get out for a meal – just the two of us – first time we have been out solo since our last wedding anniversary in December 2006.

We need to get out more, so we need to find a good babysitter (or babysitters) so that we are not always using the same people and hence we feel as though we take the pi%% a little.

Today, Simon setup Elliot’s garden toys – i.e. inflatable JCB ball pool, and inflatable toys on a 2.5m square playmat. We got it all setup, played for 30 mins and then slept ……… for about 2 and a half hours 🙁

Vicky and Simon sat out on the loungers while Elliot slept – in honesty, not a lot else happened – a great way to spend a Sunday afternoon 🙂

Video footage has been taken but will be a few days before it can be processed. 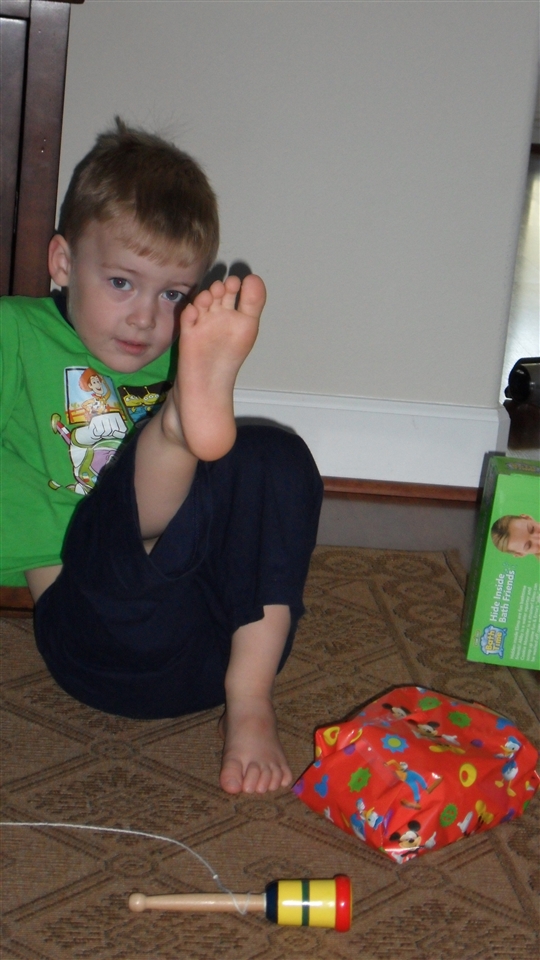