So, while Simon has been searching for work, he has found an activity that he can spend more cash on – car detailing.  He won’t bore you to death with the details but suffice to say that Tina now has the cleanest and silkiest paintwork that she probably has done ever, and the amount of gear that is piling up in the garage is pretty significant.  Today, he has been cleaning up her exhaust tips while Olly played in the garden with bubble mixture and Elly and mummy were away on a school trip – to Hesketh Farm Park in Skipton.

Also, the tumble drier broke on Monday so we are awaiting the delivery of the replacement – the delivery company said they would deliver between 14:50 and 16:20 today, and it is now 16:10….. 10 minutes guys….

*UPDATE* Just received a call (16:15) from the delivery driver – they have had a breakdown and are on their way BUT are about 50 minutes away due to the breakdown – not bad service to give us a call and let us know – good on them 🙂

Yes, that is right, mummy has gone to London for the weekend with Auntie Kerrie and Auntie Yvonne.

This morning we played with our toys for a while and then went to Grandma’s for a swim and a spot of lunch. Elliot is in need of more swimming practice and he will soon be able to do away with the arm bands, and Olly – well Olly just has no fear. We popped Olly in his new swim apparel – basically a float across his chest attached to two floating armbands – it is really good and keeps him perfectly afloat, while allowing him to “swim” more naturally. For two boys who apparently did not want to go swimming, they had a great time and Daddy is looking forward to the sleep that it affords him later tonight… 🙂

After a nice lunch, we head down to Toys R Us to spend a little birthday cash and a little cash for certain buy guy who has proven that he does not need pul-ups overnight anymore – 7 consecutive nights of proof enabled a small purchase in the boys’ favourite store 🙂

Daddy spent, no invested (:-) ) a few hours this afternoon in claying, polishing, paint protecting and then waxing Tina 🙂 The Blackfire range claims to deliver a shine that looks like it is dripping wet. Well, a couple of things;

The shine that she has is outstanding – Simon now does not feel any desire to drive her to get her dirty….

We have enjoyed quite a few hours of garden play time in the last week or so – betwixt the rain showers of course.  Olly enjoyed the sunshine ALL DAY on his birthday which was a result.

Daddy moved the monkey puzzle tree out of the back garden and transplanted it into the front garden yesterday, so we will see if the poor thing has survived – it has grown maybe 6 or 8 inches in height in the last 7 years – as a comparison, a similar tree in Grandmas garden has grown more than 6 feet…  He also did a little weeding and some grass seed sowing.

Mummy and daddy went to Whiteley’s for lunch with Auntie Anita and Auntie Clare yesterday and lardy daddy ate one and a half key lime pies following a steak sandwich and chips… He claims it to have been the best key lime pie he has ever eaten and hence why he needed more.

So this leaves the following to do items around the house:

This is just the starter for 10 list – there are bound to be many many more such as polish and wax Bruce and Tina, look at replacing the driveway in the front garden and replant the edges of the drive (after extending the driveway slightly to better accomodate cars.

Oh well, the fun just continues.  Oh and boys weekend this weekend as mummy is going to London for the weekend with Kerrie and Yvonne…

Today was the day where the long awaited appointment for Olly was with a paediatrician at Pinderfields Hospital in Wakefield.  So we collected Olly from school after he had eaten lunch for a 1:30pm appointment.  When we arrived at the hospital the Childrens Centre was closed up, so we thought we may be walking into a problem – seemingly they close up for lunch…

So, the good news was that we were more than likely FIRST in after lunch 🙂  A nurse came and measured his weight, height, blood pressure etc and then we were straight into a chap called Dr Jones.  We were there around 30 minutes carefully delivering all the details about the last 2 years or so, and he took notes – felt a bit like he had not read up about us at all prior the the visit which was definitely a little disappointing.  However, he then turned to Olly and asked how well he took to being examined – we cringed and said not well sadly.  Then the little monkey demonstrated the complete opposite as he sat and did everything that Dr Jones asked of him and smiled along the way – he was arguably a model patient 🙂

As we were coming to a close, Dr Jones suggested that there were a few possibilities, the first being that perhaps Olly is just unlucky and gets every virus as it passes by – although he almost immediately threw that one out given that otherwise Olly is in great shape – a good weight, pretty good height and in good health.  Next, he suggested that we needed to keep an eye out for mouth ulcers at the times of fevers as well as throat lumps as he would like to rule this out completely.  We also have to google and review cyclic white blood count and periodic fever – both linked to the low white blood count during his (Olly’s) last blood tests.  He is wondering whether the white blood cell count was down because Olly was recovering from the fever or if it is something that we should get a better grip on.  To this end, he asked us to collect blood today in order to be able to run a plethora of tests  against hopefully to rule some of the above out completely.  He also wanted a urine sample taken during a bout of the fever – that is going to be fun to collect since Olly does not seem to be ready or indeed want to get out of nappies.  We tried last week to no avail, and are set to start again next Thursday after school finishes.

We had the bloods taken right after the appointment, or 30 minutes after such that Olly could have some numbing gell applied and for it to be active.  This actually went really well as well and we did feel like we had needed to force him to allow us to take blood 🙂

We will be heading back to see Dr Jones in August sometime armed hopefully with more information surrounding the periodic fevers and the throat / mouth ulcers as well as having collected urine during a fever instance. 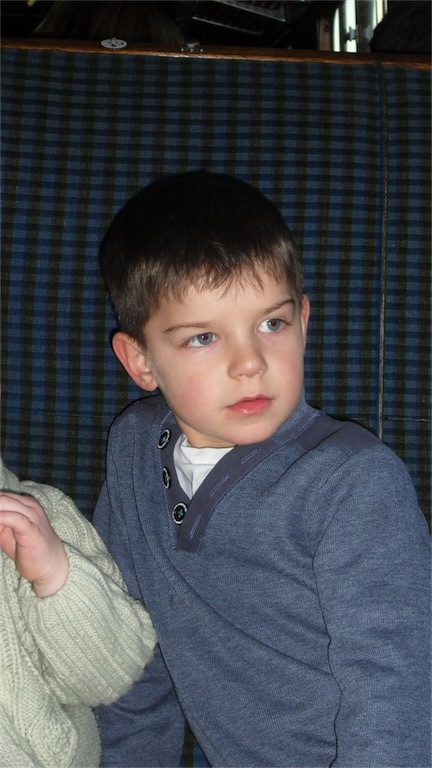